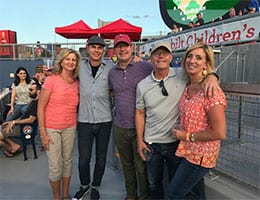 You can never have a bad time at a Nashville Sounds baseball game. Our team at Advocate Capital, Inc. can tell you firsthand what a blast it is to watch a game at First Tennessee Park and root (root root!) for the home team. In fact, we’ve had the opportunity to see the Sounds in action for the past three years, and this year was no exception.

On Monday, June 26th, several of the Advocate Capital staff and their families gathered to catch the Sounds compete against the Round Rock Express. The group was treated to drinks and an endless buffet of hamburgers, hotdogs, baked beans, and coleslaw while they watched the game from the Vanderbilt Children’s Picnic Place in right field. The view was perfect and sat us directly beneath the park’s high-definition guitar scoreboard.

During the game, the group enjoyed socializing and great weather, and many were given fun bobble heads to take home. After several hours at the park, the Sounds came out on top with a 5-3 win against Round Rock, making the night an all-around home run for our entire group!

To see photos from the Sounds event, check out our Facebook and Google+ pages!