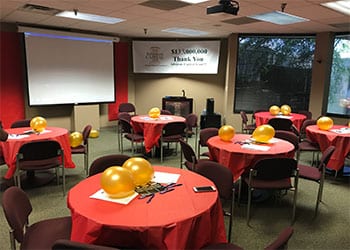 When you think of summer, things like backyard BBQ’s, fun festivals, and pool parties probably come to mind, but one other summer favorite is going to catch a great movie. Right now, the box office is full of summer blockbusters like “Wonder Woman” (Warner Bros.) and “War for the Planet of the Apes” (20th Century Fox), and you’ve most likely seen a few of them already. Well, our team here at Advocate Capital, Inc. also enjoys a great movie, and though we can’t trade in work for a ticket to the theater, we did get a chance earlier this week to take in a flick over lunch.

The Marketing Department hosted “Lunch and a Movie” for staff at our Nashville office on Wednesday, July 12th. The event was a first for Advocate Capital’s Employee Appreciation series, as well as a first for Marketing’s cleverly-dubbed “Advocate Capital, Inc. Cinema”. The team wanted employees to get the full moviegoing experience, so they set up a concession stand with fresh popcorn, candy, and snacks from “Double Dogs” as well as a big screen to watch the film. There were also decorations and props placed throughout the office that created a true movie theater atmosphere.

During the film, staff played a quotes quiz and a celebrity crossword puzzle for the chance to win $25 Regal Cinemas gift cards. Only two people could answer the questions correctly, and they were movie buffs, Bea Solorzano and Buffy Escue!

The Marketing Department’s “Advocate Capital, Inc. Cinema: Lunch and a Movie” allowed the Advocate Capital team to enjoy a fun summer experience together in the office. We are all looking forward to the next time we get chance to catch a flick at work (in between helping our clients of course), but until then we’ll just stick to seeing them on the weekend!

If you would like to check out more pictures from the event, visit our Facebook and Google+ pages!