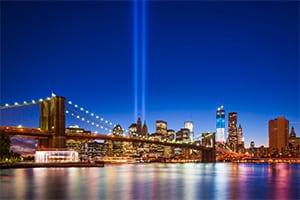 Today marks 16 years since the deadly terror attacks of 9/11, one of the most scarring days in U.S. history. On September 11, 2001, nearly 3,000 people lost their lives after al-Qaeda members hijacked planes and flew them into the World Trade Center, the Pentagon, and a field in rural Pennsylvania. The tragedy not only left thousands of families without loved ones, but it left the country stunned after seeing the true threat of global terrorism and how it feels to be a target of hate. To this day, the 9/11 attacks remain the deadliest to ever happen on American soil.

As we reach the 16th anniversary of these acts of terrorism, the country still mourns and remembers the men and women who were killed, but it also celebrates the strength of their families, the survivors, and those who risked their lives to save others that day. The 9/11 attacks sent shockwaves throughout America in 2001, and now every year after, they serve as a reminder to stay united as a nation.

Our team at Advocate Capital, Inc. will never forget the events that took place 16 years ago, and we pay respects to those affected by the tragedy. We hope that you will join us in commemorating today’s 9/11 anniversary by keeping them and this country in your thoughts and prayers.