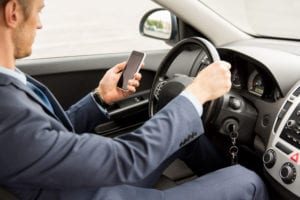 Are smartphones to blame for distracted driving accidents? Wendy Lee with the San Francisco (CA) Chronical reports that families of some victims of distracting driving seem to think so. These families are proposing “technology that could prevent crashes caused by distracted drivers.” Experts are saying “there is no technological reason” that would prevent companies from creating such a thing. Apple argues against this by saying crashes are “caused by the distracted drivers misusing the technology, not a defect in the iPhone.” They proceed their argument by stating all the other potential driving distractions where the manufacturers or service providers are not liable, such as; doing your hair and makeup in the car, or eating a meal in the car.

Many studies have been done to conclude this concern. A Zendrive study found that drivers use phones in 88 percent of trips between December 2016 and February 2017, a Zendrive study of “570 million trips among 3.1 million drivers” found. According to National Highway Traffic Safety Administration data, “nearly 3,500 people died in distraction-related crashes in 2015”.

Over all, the National Highway Traffic Administration “supports having users manually turn on features that prevent distracted driving until technology is developed to make it easier to distinguish between whether a smartphone user is in the driver’s or passenger seat”.

For more on this study, read the full article here or visit The New York Post and Mashable where they also provide coverage.