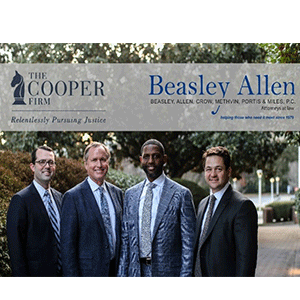 High-profile Plaintiff’s firm Beasley Allen is expanding into the Atlanta area.  The firm based in Alabama has announced the opening of their new office in Atlanta, Georgia with Advocate Capital, Inc. friend and client, Lance Cooper, becoming a principal.   Beasley Allen handles class action cases and multidistrict litigation throughout the United States.  Lance Cooper is known for his expertise in product liability cases, most notably, the GM faulty ignition switch case.

The massive recall started with a single tragic case.  Ken and Beth Melton came to Mr. Cooper after their daughter’s fatal crash in her Chevrolet Cobalt.  Mr. Cooper’s experts discovered the faulty ignition switch that prompted GM to recall millions of defective and dangerous vehicles. The recall included roughly 30 million vehicles, and hundreds of lawsuits ensued across the country.  The Melton case resolved initially for a confidential sum that GM later disclosed as a $5 million settlement.  However, when evidence confirmed that GM committed perjury and hid critical evidence, the case was reopened.

Beasley Allen and Lance Cooper worked together in the reopened case and forged a solid foundation for their continued joint efforts for justice for their clients.   We have blogged about the Melton case previously in this space on 2/26/2014 and 5/30/2014.  Wading through the corporate giant’s attempts to thwart liability, Mr. Cooper was successful in proving GM not only knew about the ignition switch defect but did nothing to protect its customers from the deadly consequences.  Advocate Capital, Inc. also shared that GM’s attempts to hide behind their 2009 Bankruptcy were unsuccessful in our July 2016 post.  GM paid a $900 million penalty to resolve criminal charges for hiding the defect.

The dynamic pairing of Beasley Allen and The Cooper Firm is good news for consumers across the country.  Mr. Cooper is quoted, “It’s been a good partnership. We’ve been able to help our clients and do greater public good getting companies to recall their products.”

Tenacious attorneys like Lance Cooper and those at Beasley Allen hold corporate America accountable for their actions and are champions for those injured by defective products.