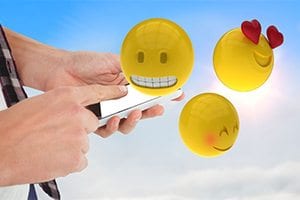 Emojis and emoticons have become a major part of communication via text and social media posts. They are essentially a language of their own. Naturally, the more and more popular emojis become the more likely they are to come up as a point of contention in legal cases.

In Mike Cherney’s article about the topic for The Wall Street Journal, he states that in 2017, “emojis or emoticons were mentioned in at least 33 U.S. federal and state court opinions, according to research from Eric Goldman, a law professor at the Santa Clara University School of Law. That is up from 25 in 2016 and 14 in 2015.”

A landlord in Israel sued a couple who he believed had agreed to rent an apartment from him based partially on the emojis they sent in a text conversation. The couple stopped responding to his messages shortly after he took down the apartment listing. The couple were found to be guilty of bad negotiating and fined a month’s rent.

As pointed out in an article by Gabriella Ziccarelli and Eric Goldman on the Technology & Marketing Law Blog, each emoji can mean something different depending on the context of the conversation or the sender’s sense of humor, culture, geographical location, etc. This can make it difficult for lawyers and jurors to determine what the use of an emoji means for a case.

Some of the ways the meaning of an emoji to a case may be deciphered is by asking the sender what they intended, asking the receiver how they interpreted the message, ensuring the jury can see the messages in question, and looking up the name of the emoji to get some insight on its meaning.

Although emojis may not always turn out to be important to every case, legal professionals should be prepared to see more and more issues and challenges related to emojis in the courtroom in the coming years.