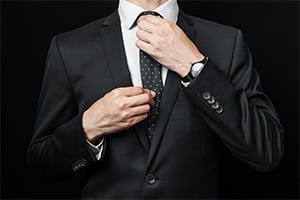 Every attorney is well versed in the law, but what about the laws of fashion? The legal field’s changing landscape is making these rules a bit harder to wrap our heads around, and as a result, making it difficult for both male and female lawyers to know how to dress for the job.

In an article in the ABA Journal, Liane Jackson says it wasn’t that long ago that the lawyer dress code was constrained and predictable: monochromatic color schemes, boxy-shouldered suits, and womenswear that was basically menswear. Now, she says legal fashion is loosening up, with a growing trend toward style and comfort. Jackson says depending on your location or practice area, you may find female attorneys opting for no sleeves and their male counterparts opting to wear dress shoes with no socks.

There has also been a shift to more tailored attire and wearing clothing as a form of self-expression. However, some warn that going “too tailored” with your fashion choices can lead to unintended consequences: “It’s a balance of being respectful and being an individual” says Attorney Shelley Duff in the article. “The law still has that aspect of tradition. It doesn’t let you go too far, but I try to push the boundaries of what I wear.”

Jackson says your appearance is key to making a good first impression, especially in the courtroom where jurors may be judging both the case and those making the arguments. She says rules can vary from court to court and in each jurisdiction, but overall, attire in these proceedings remains relatively conservative. “The courtroom is the last bastion of formality in America. We’ve stopped dressing up for the theater, for church, but when it comes to court, there are still rules,” says the Fashion Law Institute’s Susan Scafidi in the article.

So, what should a male or female attorney wear that will reflect their personality but also remain professional? Jackson says there is no one answer. Some days, a lawyer’s outfit can be their suit of armor, mentally and visually preparing them for a legal battle. Other days, their fashion choices may provide a break from the formality. But if you must know, she says a winning look is whatever you feel and perform best in.