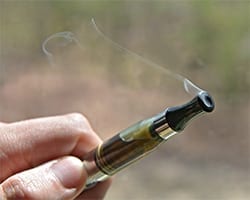 CNN reports that a Florida man was found dead last month after an e-cigarette explosion. Officials found the man with a wound to his top lip and burns on his body. A section of the e-cigarette, manufactured by Smok-E Mountain, was projectiled while the device was in use.

According to the US Food and Drug Administration, the cause of e-cigarette explosions is often unclear, but in many cases, evidence suggests that battery-related issues lead to the explosions.

Thomas Kiklas, chief financial officer of the Tobacco Vapor Electronic Cigarette Association, explains that e-cigarettes with a smaller wattage unit “may not have the power to fail as dramatically” as those with larger batteries. Kiklas says, "The two major causes of dramatic failures with the larger units are overcharging of the battery and then the shorting of the battery."

E-cigarette explosions are rare, but this is not an isolated incident. Data from the US Fire Administration shows that there were 195 separate e-cigarette fire and explosion incidents in the United States reported by the media between 2009 and 2016.

Click here to read CNN’s article about this incident.