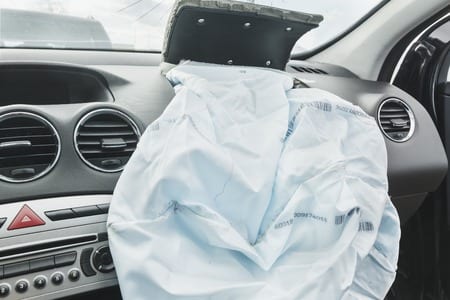 Tired of hearing about the Takata airbag recall? You’re not alone. But now the issue is expanding to more than just cars already on the road. People shopping for a new vehicle should also be on high alert. According to a recent article by Cars.com, there are several automakers using Takata airbag inflators in their 2016 and 2017 models, despite the National Highway Transportation Safety Administration recalling more than 28 million of them here in the U.S. Some of the top offenders? Fiat Chrysler, Mitsubishi, Toyota, and Volkswagen. These companies and a handful of others are ignoring the NHTSA’s warnings and installing airbags that have been known to degrade over time, rupture at excessive force, and send deadly shrapnel onto passengers in a car. So far, their decision to use these defective airbags has left 10 people dead and more than 100 people injured.

Even if you’re not shopping for a new Toyota or Volkswagen, you could still be at risk. Cars.com reports many of the automakers that are not putting Takata’s volatile inflators in their new vehicles (Honda, Nissan, and Subaru) are still using Takata’s less-volatile, desiccated inflators in new 2016 and 2017 cars. What’s the difference? The recalled airbag inflators contain an unstable chemical mixture called ammonium nitrate. Over time, as the airbags take in moisture from heat and humidity, they can rupture and explode. Takata’s less-volatile inflators have a desiccant inside them to block that moisture; but they, too, can lose their effectiveness over time.

As of right now, Cars.com says the NHTSA has issued a consent order with Takata requiring it to stop producing inflators with ammonium nitrate by December 2018. The agency has also required the company to prove the safety of desiccated inflators before 2020, or the so-called “less volatile” alternatives will join the list of recalled Takata products. So far, regulators say there have been no known rupture incidents with airbags containing desiccant, but the long-term safety of the absorbent chemical is still up in the air.

Check out Cars.com’s full article to see which new cars are getting produced with Takata airbag inflators. You can also click here to read more recall-related posts on Advocate Capital, Inc.’s blog.