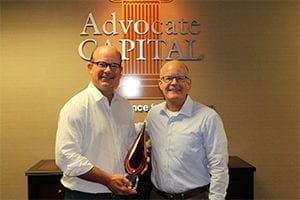 Congratulations to Advocate Capital’s Chief Credit Officer, Paul B. Myers, who celebrates his 15th employment anniversary this week!  Paul was employee number 2 when he joined us way back in 2002 and his hard work and dedication have played a key role in our company’s success.  When Paul joined us, we had just a handful of clients… and at the moment that number is well over 400!

Paul graduated from Sewanee: The University of the South in 1989 and spent over ten years working for Bank of America in a series of increasingly responsible roles.  After a few years as a CFO at local Nashville companies, Paul joined our team and has led our Credit Team to great success.

Thank you, Paul and congratulations on this great milestone!