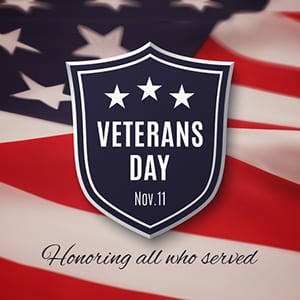 Veterans Day means different things to different people. For some, the day symbolizes the end of a bitter World War filled with service and sacrifice; but to others, it is a day to reflect, celebrate, and pay tribute to not only the fighters of WWI, but to all American veterans, living or dead, for their patriotism both during battle and peace.

Veterans Day began back in 1919, a year after the end of the First World War. It was originally dubbed “Armistice Day” in light of the temporary cease in hostilities that took place between Germany and the Allied Nations in 1918 on the 11th hour of the 11th day of the 11th month. However, it wasn’t until several years later that November 11th became a national holiday that is observed regardless of what day of the week it falls on.

Advocate Capital, Inc. is thankful to all of America’s veterans for their willingness to serve our country for the greater good. These brave men and women have protected the freedoms and rights we hold dear, and we hope that you will join us in celebrating them not just on Veterans Day, but every day of the year.

Here are a few facts about the current U.S. veteran population as listed on History.com: