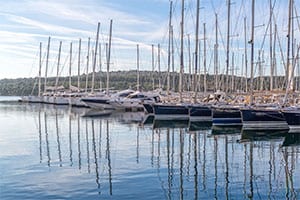 Fourth of July may be behind us, but there are still plenty of opportunities to get out on the water this summer season, especially if you own a boat. Taking your boat down to the marina is a perfect way to spend an afternoon, but it can also put you in harm’s way if you don’t take the right precautions.

The National Fire Protection Association (NFPA) says marinas pose risks such as electrical hazards, carbon monoxide, along with other dangers that can result in serious injury or death. Last year, nearly 1,000 accidents occurred in marinas and other similar bodies of water, with almost 10% of those accidents ending up deadly according to the U.S. Coast Guard.

Although marinas present risks to boaters, they are especially dangerous for those who choose to swim in these waters. Eric Chaffin of The Legal Examiner says always think twice before taking a dip in a marina because you may wind up electrocuted. He says the water can become electrically charged from the docks and boats that carry electricity. Chaffin says faulty wiring or grounding, damaged electrical cords, or other flaws can happen and potentially send an electrical current in the surrounding water. He says even one boat experiencing an issue can cause a domino effect because most marinas have a shared electrical system.

Like the NFPA, Chaffin says carbon monoxide poisoning is also a big hazard for boaters and swimmers around a marina. He says the gas can accumulate near a boat’s exhaust vent and hover six inches above the water (where swimmers often breathe). He also says the boats themselves can be hazardous to swimmers because of their propellers. Yet, even swimming at a distance can put you in contact with things like cables, hooks, fishing lines, sunken docks, and old pilings or litter.

Chaffin says the problem with many of these marina dangers is that they aren’t visible to the naked eye. What is visible are the common “no swimming” signs around these areas. He says it is best to obey these signs and only use a boat while you are enjoying the marina. Chaffin also says boat owners can help reduce hazards by installing CO alarms, conducting routine maintenance and circuit tests on their boat, and having it inspected annually.