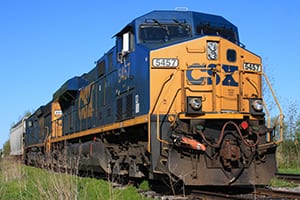 Congratulations to John Steel, John Moss, their client and the entire team at the Atlanta firm of Steel & Moss, LLP on their recent settlement mid-trial on behalf of a railroad conductor who fell from a moving train.

The Plaintiff was an inexperienced conductor and employee of CSX Transportation, Inc. (CSXT) who was riding the side ladder of a rail car in full compliance with all rules and practices of CSXT.  The evening in February was dark and cold as the train travelled at 19 mph across the bridge.  The rail car had no protection, guard or protective railing and the Plaintiff fell from the car into the Jackson River sustaining a traumatic brain injury, rib and facial fractures, hypothermia and pulmonary contusion.

Prior to this incident, CSXT supervisors had received numerous complaints from employees about the dangers associated with men riding the side of rail cars but Defendant failed to modify its practices, rules or policies.  In fact, CSXT supervisors had received complaints dating back to 1989 in safety committee meetings about the need for a “shoving platform” with protective railings and a flat standing surface.   CSXT did in fact have a shoving platform at the rail yard but neither made use of this equipment mandatory nor advised Plaintiff it was available.

In this FELA (Federal Employers Liability Act) lawsuit, CSXT argued that the injuries caused by the railroad’s negligence were not compensable because the Plaintiff could not recall any of the events from the night of the fall (due to the traumatic brain injury).  Mr. Steel delivered a classic argument that “common sense alone raises a jury question as to why Plaintiff was ever on the side of an unprotected car as it crossed the unguarded bridge with the Jackson River 40 feet below.”

To learn more FELA cases and other significant jury verdicts and settlements by the Steel & Moss firm, click here.

Advocate Capital, Inc. considers it an honor to support the efforts of trial lawyers like John Steel as they pursue justice for injured citizens due to the negligence of others.