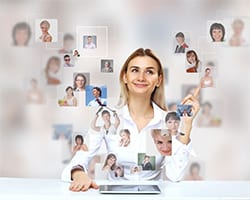 Can you imagine doing your job without email? Probably not. It’s hard to believe the essential communication tool only hit the scene about 25 years ago, and didn’t become widely used in the legal profession until several years later. Yet, as essential as it might be, some argue that email and other technology have made the “Art of Interaction” obsolete, claiming they have left lawyers with rare opportunities to have face-to-face conversations and build personal relationships. In an article in Above the Law, Carolyn Elefant, challenges this viewpoint, saying that rather than kill the personal touch in law practice, technology has transformed it.

Elefant says before the internet age in the late 90’s, interacting with other attorneys was difficult. She says most of the so-called “personal connections” others argue have been lost because of technology, were actually never made. Elefant says these relationships only worked if a lawyer had something to gain (i.e. a referral or new connection), and if you were a young lawyer just starting out, you probably had nothing to give.

Elefant says before technology took over, legal tasks were also tough to do. From researching a case’s legislative history to filing a brief, things that now only take a click took hours to accomplish. She also says bar activities and CLE programs were more difficult to attend 20 years ago. Elefant says many meetings were scheduled during your lunch hour or miles out of town, and for a lawyer whose every minute counted, they weren’t an option. But once technology came about, it meant no more trips to the law library for research or ever physically carrying a brief somewhere. She says it enabled attorneys to do more in their work day rather than spend longer hours making up lost time.

Elefant says not only has technology enabled hundreds of attorneys to create meaningful relationships, but it has impacted the legal profession in ways that reach far beyond the social realm. She says it has given attorneys opportunities to expand their practice to other metropolitan areas, room to reinvent themselves, and access to building better careers. And because it has brought all these benefits, she says technology cannot truly be a bad thing.

To read the full article in Above the Law, click here.