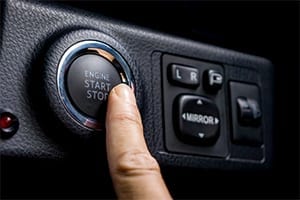 Most new vehicles now have keyless ignitions. Cars with keyless ignitions require a fob that transmits a signal to start the car as opposed to a physical key. The driver is able start and stop the car with just the push of a button. This new feature is convenient, but it can also be dangerous if the driver forgets to push the button to stop the car before leaving it.

A car that is unknowingly left running inside of a garage can lead to unintentional Carbon Monoxide poisoning, which can result in death, coma, deafness, brain damage, memory loss, cardiac problems, concentration problems, and more. Leto Copeley of Copeley Johnson & Groninger PLLC writes, ”According to a recent New York Times study, 28 people have died of carbon monoxide poisoning caused when a keyless ignition vehicle was mistakenly left running. Another 45 have been injured.”

Some cars with keyless ignitions beep or sound an alarm if the driver closes the car door without stopping the car, but many do not have any safety features installed to safe-guard if the driver forgets to push stop. Copeley reports that the National Highway Traffic Safety Association has expressed concern and issued warnings to consumers and automakers over the years, but no action has been taken.

In 2011, the Society of Automotive Engineers recommended that regulations be put in place that would require all future vehicles with keyless ignitions to have safety features that alert drivers that the car has been left on or shut-off automatically after the car has been unoccupied for a certain period of time, but the automotive industry was opposed so no regulation was ever put in place.

People who own vehicles with keyless ignition, even those with safety features installed, should take precautions to protect themselves and those around them from these serious risks. Copeley suggests installing a Carbon Monoxide detector in your garage, checking each time you walk away from your car that it has been shut off, always taking your fob with you when you exit your car, and storing your fob far away from your car when it is not in use.