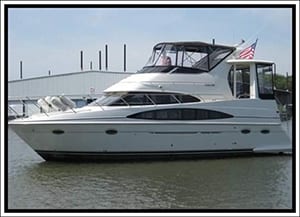 In late 2013, a Dekalb County Georgia jury returned a verdict in the amount of $10.2 MM against Carver Boat Corp. and Genmar Yacht Group. Following an 8-day trial, the widow and her two young sons finally obtained justice for the senseless death of a 45 year old husband and father who made the unfortunate choice to turn on the generator for air conditioning on their houseboat overnight.  The next morning he was found dead by marina employees as a result of carbon monoxide poisoning.

Attorney Terry D. Jackson and his team worked tirelessly for over three (3) years on behalf of this family.  The jury found that the boat’s faulty design caused carbon monoxide to back up into the cabin and that the company failed to warn users of that risk.   The American Boat & Yacht Council requires that each engine have its own exhaust system and that the exhaust gases discharged from those engines be released outside the boat.   The defense’s own expert testified at trial that the design did not meet ABYC standards.

The defense arguments included (1) it was not liable for plaintiff’s death because it had no duty to warn of “those dangers that are obvious, generally known, or actually known to the Plaintiff or the decedent” (2) that the plaintiff presented no evidence that the boat’s exhaust system design was defective other than it was “contrary to ‘recommended’ [ABYC] guidelines that Carver represented it had met, and (3) that plaintiff’s blood alcohol content indicated he was drunk and had he not been, he would have recognized that he was slowly being deprived of oxygen due to the presence of carbon monoxide in the cabin depriving him of oxygen.

Mr. Jackson argued that there is no law that prohibits consumption of alcohol in your own home and this yacht was a houseboat used by the family.  Plaintiffs also submitted that the situation was no different than having 3 glasses of wine at home on Friday night with a gas HVAC furnace malfunctioning causing death.  Carbon monoxide is an odorless, colorless, tasteless gas.

Plaintiffs tendered a $5MM offer of judgment prior to trial and the defense countered with a 0 offer.  Earlier in the litigation, the defendants made an offer of judgment for $10,000 - arguably a bad faith gesture.  The case was featured in the Daily Report and the entire article can be read here.

Congratulations to Terry Jackson, his clients and his team on a job well done on behalf of this family who lost their leader due to the negligence of a corporation and arrogance of insurance carriers who wouldn’t do “the right thing.”

Advocate Capital, Inc. considers it a privilege to support trial attorneys like Terry Jackson who fight the tough battles to insure corporate accountability and obtain justice for injured citizens.