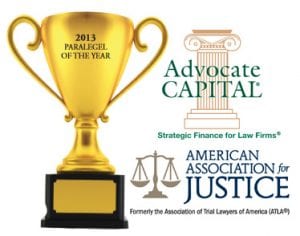 Last month we blogged about our partnership with the American Association for Justice to sponsor this year’s Paralegal of the year award. This is just a friendly reminder that the deadline for nominations is approaching; Monday – May 20th, 2013.

The winner of the 2013 Advocate Capital, Inc. / AAJ Paralegal of the Year Award (to be announced later) will be treated to free airfare, hotel, and registration to AAJ’s 2013 Annual Convention in San Francisco, California.  An official award presentation will take place during the Paralegal Affiliates Meeting on Saturday, July 20th at 3pm during the AAJ Annual Convention at the Hilton San Francisco, Union Square Hotel.

“To promote a fair and effective justice system — and to support the work of attorneys in their efforts to ensure any person who is injured by the misconduct or negligence of others can obtain justice in America’s courtrooms, even when taking on the most powerful interests.”

If you have not yet done so, nominate someone today by clicking here!