Orphan Aid, Liberia was created in 2008, when Daryl Roberts of Cartersville, GA went on a mission trip with his local church. During this trip, Daryl was guided to visit a group of children living in an orphanage that was in dire need of help.

Because of a brutal civil war that shattered the country, 300,000 children were orphaned and abandoned in Liberia, West Africa. After a few days on the mission trip, Daryl knew that God had placed these children in his life for a purpose and that he was called to care for them. Daryl immediately called his wife, Chrissy, and she began collecting clothes, food, and school supplies before Daryl even returned.

A message from Lance:

Supporting Orphan Aid Liberia has changed my life. I have seen what a difference OAL has made in the lives of hundreds of orphans. Without OAL, these orphans would have little hope. With OAL, these orphans are now fed, clothed, housed, and educated. Most of all, they are loved. I hope you will join me in support of this incredible organization.” 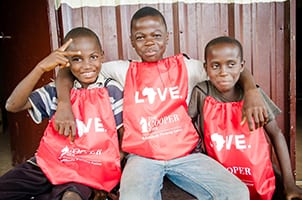 September 22, 2016, marked the 20th trip since the program began in 2008. These regular visits are about providing the basic necessities of life that we often take for granted. This includes food supplies, hygiene supplies, roofs for the orphanages, mattresses for the children to sleep on, and clothes for them to wear to replace those outgrown or with holes. They’ve delivered medical supplies and provided care, dewormed hundreds of children and provided eye glasses. Lance himself has made the trip many times and seen the difference this organization makes for the hope and general well-being of the orphaned children.

This event will feature both a silent and live auction, as well as merchandise and ways to donate to the organization if auctions aren’t your style. There will be live music, plenty of food and drinks and an all-around feel-good time!

Advocate Capital, Inc. is proud to support this very worthy cause.