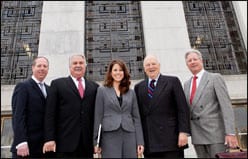 The important work that trial lawyers do cannot be overstated as five former employees of Lawrence Livermore National Security, LLC, (LLNS) found out on May 10, 2013 after an Alameda County jury returned a verdict of $2.7MM in their favor following two months of trial.  These five individuals, all long-time employees, were Wrongfully Terminated in 2008 according to the suit filed on their behalf, Andrews, et. al. v. Lawrence Livermore National Security, LLC., Case No. RG09453596 and confirmed by a jury who returned the $2.7MM verdict in their favor.

As reported recently by PR Newswire, Oakland’s law firm Gwilliam, Ivary, Chiosso, Cavalli & Brewer, led by Gary Gwilliam and his team of expert trial lawyers, Randall E. Strauss and Robert J. Schwartz, championed the cause of the these five wrongfully terminated individuals.  These five individual cases were selected as “test cases” from the 130 Plaintiffs in the lawsuit alleging they were laid off in 2008 by Lawrence Livermore National Security, LLC (LLNS) in a bad faith violation of their employment contract.   In total, there are 130 Plaintiffs with claims against LLNS for age discrimination, in a later phase of the case.

Gary Gwilliam has been practicing law for 50 years and has tried more than 180 cases to verdict.  This team has a depth of trial expertise that helped these five hard-working individuals, wrongfully terminated by a big corporation, get the justice they deserved. The important work that trial lawyers do cannot be overstated.

Thank you, Gwilliam, Ivary, Chiosso, Cavalli & Brewer for championing the cause of consumers like these 130 Plaintiffs, every day!