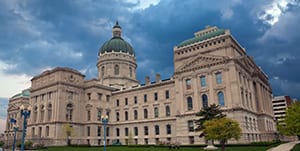 A recent article by the Associated Press reports from Indianapolis that attorneys for a 13-year-old Ohio girl “hurt when a stage collapsed at the Indiana State Fair argued Monday that the state’s cap on liability damages is unconstitutional and should be thrown out by the Indiana Court of Appeals.” Jordyn Polet of Cincinnati “rejected Indiana’s offer of $1,690 to challenge the $5 million cap on total damages paid to victims of the 2011 collapse, which occurred when high winds blew down rigging before a concert by the country duo Sugarland. Seven people were killed and more than 100 were injured.” Jordyn’s attorney, Robert Peck, “argued the cap on total damages from a single incident means people are unconstitutionally denied equal treatment” and he said “that if she had suffered the same injury but had been the only casualty, she could have sought up to the $700,000 in individual damages.”

Originally, the state paid $5MM to about 62 victims and the Indiana General Assembly approved another $6MM for another 59 victims in 2012.  This settlement was found to be constitutional by the original judge, Marion County Judge Theodore Sosin.  Ms. Polet appealed this decision and oral arguments were recently heard in the Indiana Court of Appeals.