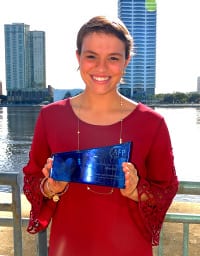 Advocate Capital, Inc. friend and client Chalik & Chalik Injury Lawyers are proud to announce the recipient of the First Annual Survivor’s Scholarship. Marissa Ierna was chosen as the $1,000 scholarship recipient because of her efforts to raise more than $12,000 for the oncology unit at Wolfson Children’s Hospital.

Marissa was diagnosed with a rare form of cancer after in her right calf. Marissa is an athlete, and chose not to undergo surgery which would have prevented her from running again. She underwent chemotherapy and was cancer free after one year!

Marissa has been recognized by the Association of Fundraising Professionals with the 2014 Outstanding Youth in Philanthropy Award for her efforts to help the Children’s Hospital. She is also on the Dean’s List at the University of North Florida.

The first annual Survivors Scholarship was inspired by the firm’s interaction with Debbie’s Dream Foundation. The foundation is one of the most active cancer research advocates in the U.S. and lobbies to increase federal and state funding for research. The idea for the scholarship was also inspired by Debi Chalik’s mother, Eva Weissberger, who is a breast cancer survivor and relative Royce Sagenkahn, who lost his battle with appendix cancer.

Congratulations to Marissa and thank you to the Chalik Firm for giving back to the community in such a meaningful way. We at Advocate Capital, Inc. are proud to count you among our friends and clients who do so much to give back to the communities they serve.