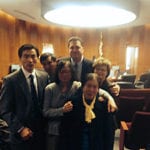 Congratulations to Christian C. Mester, his med mal team of Jean Jones, R.N., J.D. and Maria Dawson, R.N., J.D., and their clients on this verdict returned on November 25, 2013.

This case was filed in the Circuit Court for Montgomery County, Maryland by the family of a man who died of lung cancer.   The 74 year old man had a CT scan of his lung that showed a consolidation which was reported to the primary care doctor (PMD).  All the testimony and proof at trial confirmed that a consolidation is abnormal and concerning.  Also, all were in agreement that this condition can be caused by, among other things, pneumonia, scarring, tuberculosis or lung cancer.  Everyone agreed that lung cancer needed to be ruled out, everyone EXCEPT the defendant PMD, who merely assumed that it was not cancer and never repeated the CT scan within an appropriate time period.  Instead, the defendant PMD waited 20 months before he belatedly diagnosed cancer.  By that time, the lung cancer had progressed from Stage I to Stage IV and the plaintiff died 9 months later.

The defense focused on the fact that plaintiff did not show any signs of pneumonia, tuberculosis or cancer.  Defense counsel then argued that even if [the jury] thinks the PMD should have diagnosed the cancer 20 months earlier, too bad because the cancer was already advanced to Stage IV even in 2009.

In talking with jurors afterwards, the jury was not persuaded by the defense, as it stated that their main focus was on the need to follow-up on an abnormal and concerning CT Scan report, which the defendant completely ignored.  The verdict provided for non-economic damages for the decedent of $1.5M, $1M for his surviving wife and $350,000 for each of his surviving children.

Attorney Jones and Attorney Dawson, both of whom are registered-nurse attorneys, were instrumental in prosecuting this case on behalf of this family.  Both lawyers bring their years of nursing experience to every client of Goldberg, Finnegan & Mester, LLC, and their lawyer and nursing skills are invaluable.

Attorney Mester, a partner in the firm Goldberg, Finnegan & Mester, LLC, concentrates his practice exclusively to victims of catastrophic injuries in the area of medical negligence.  He is a former chair of the Medical Negligence Section of the Maryland Association for Justice and is a frequent lecturer and published author.   Christian received a preeminent 5.0/5.0 “AV Peer Review Rating” from Martindale Hubbell in Medical Malpractice.  He is also a member of both the MILLION DOLLAR ADVOCATES FORUM and the MULTI-MILLION DOLLAR ADVOCATES FORUM.

Advocate Capital, Inc. is proud to support trial lawyers like Christian Mester, Jean Jones and Maria Dawson, who protect the rights of patients by holding the medical community accountable.