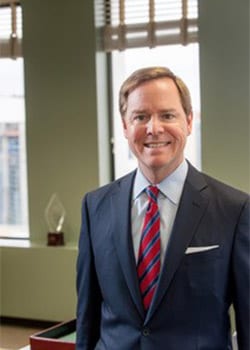 Lloyd Bell and his colleagues Michael Watson, David Schlachter, and Bruce Berger represented 58-year-old Sharon Donnell, who was severely injured at a major restaurant chain. Ms. Donnell was attending her daughter’s basketball team celebration when the incident occurred.  An employee of the restaurant was moving furniture to make room for the party, when he pushed a table into a chair that fell over on to Ms. Donnell’s foot.

Lloyd Bell said of the case,“This is an iffy case because the mechanism was weird; you wouldn’t think just having a chair fall on your foot could do so much damage, but you’ve got to meet the chair. It was like dropping a 20-pound free weight on your foot.”

The next day, Ms. Donnell went to the doctor and was diagnosed with a bruised foot and given a soft cast. Ms. Donnell returned to the restaurant later that day and reported the incident to the manager. Ms. Donnell was later diagnosed with complex regional pain syndrome, which led to surgery to implant a spinal cord stimulator to help control the pain. Due to her injury, Ms. Donnell had to quit her job as a successful paralegal at a large Atlanta defense firm.

During the discovery process, the restaurant denied ever receiving the woman’s complaint, but did eventually turn the incident report over just a week before the trial started. During the trial, Bell invited the jurors to come down out of the jury box and feel the chair to gauge the weight and stability. Bell stated, “We did a demonstration having that chair falling over, I think you could hear it three courtrooms down.” The jury returned a verdict awarding the woman the full amount requested.

Advocate Capital is proud to collaborate with attorneys like Lloyd Bell as they help those who injured through no fault of their own.  Bell Law Firm is licensed to practice in Georgia, and represents clients in Medical Negligence, Wrongful Death, Traumatic Brain Injury, Car Collisions, Motorcycle and Truck wrecks, and Premises Liability.