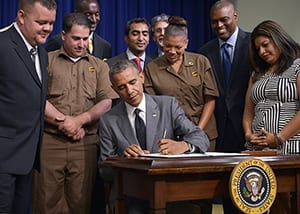 According to recent news reports, President Obama has signed an executive order, which will take effect in 2016, that will require the approximately 24,000 companies in the US which have federal government contracts to disclose all of their past labor law and other violations.  In addition, the order will put an end to the practice of corporate-paid arbitrators settling discrimination suits for these companies.  According to Paul Bland, the Executive Director of the Public Justice Foundation, the order represents the “biggest step forward in civil rights in the United States probably since the 1991 Civil Rights Restoration Act.”

A full report on the order and its impacts can be seen on here and here.