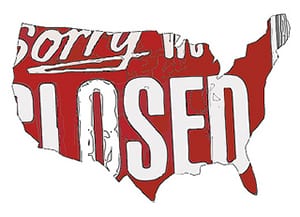 As if the sequestration weren't enough, the Fresno (CA) Bee recently reported the Federal government shutdown has caused the US Attorney’s Office for California’s Eastern District to furlough over a third of its staff, which US Attorney Benjamin Wagner said is “having a really negative impact” on the entire office. The absent staff members “means investigations have slowed, as has the issuance of subpoenas and warrants, and indictment packages.”

The website of WKYC-TV Cleveland reports, “Massive staff layoffs are having a big impact at the local United States Attorney’s office,” where only about 93 of 180 are currently working. US Attorney Steve Dettelbach “says his dedicated staff is doing the best it can, but it’s a losing battle to do what should be done.”

The website of KSDK-TV St. Louis reports US Attorney Steve Wigginton said he had to furlough 35% of his staff. As a result, “U.S. attorneys aren't fighting scam artists” and “government workers going after people misusing your tax dollars aren't working right now.” He added that “two of his attorneys are considering leaving public service because they've had enough” with furloughs, “budget cuts, sequestration and frozen salaries.”

Full article from the Fresno Bee