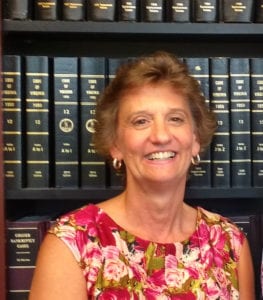 As seen on Seeking Alpha, MarketWatch, and Yahoo! Finance.

Paralegal Lisa West of Patten, Wornom, Hatten & Diamonstein, LC has been named the 2019 winner of the American Association for Justice (AAJ) Paralegal of the Year Award Sponsored by Advocate Capital, Inc. West was nominated for this honor by Attorney William W.C. Harty who has been named a Virginia “Super Lawyer” in the category of products liability and been recognized as a “Top 100 Trial Lawyer” by The National Trial Lawyers.

West earned her paralegal certificate in 1993 from Thomas Nelson Community College in Hampton, Virginia. She continues to further her education in her field. West became a Certified Paralegal with the National Association for Legal Assistants 2008. In 2015, she earned the designation of Advanced Certified Paralegal. West also became a Virginia Registered Paralegal (VARP™) through the Virginia Alliance of Paralegal Associations in 2018.

She has been a paralegal at Patten, Wornom, Hatten & Diamonstein, LC for 13 years. West excels in her position as a senior paralegal in the firm’s asbestos and product liability department. Harty says that West is a mentor for the other paralegals in the department.

Since 1993, she has been actively involved in the local Virginia Peninsula Paralegal Association. West has served in a variety of leadership roles within the association and has been nominated as President for the 2019-2020 fiscal year.

West is also a member in good standing with the National Association of Legal Assistants (NALA), Virginia Trial Lawyer’s Association (VTLA), and The American Association for Justice (AAJ).

West was appointed by the Newport News Juvenile and Domestic Relations Court as a Court Appointed Special Advocate (CASA), where she served as an advocate for children in the foster care system from April 2010 until April 2017. She was awarded a Certificate of Excellence by the CASA program for her work.

She volunteers in her local church and is active member of Building Bridges with Books through the Established Footsteps ministry. Building Bridges with Books is an organization that helps build stronger relationship between mothers/grandmothers and their children while the mother/grandmother is incarcerated by providing them with books and recording them reading stories for their children.

Harty said of West, “Lisa is a very competent and caring professional who exemplifies the values of the AAJ. She is passionate about helping those who are less fortunate or who have been injured through the negligence and misconduct of others. Her professional and personal life is based on a core ideal of standing up for the underdog and helping them stand up to oppressive forces in their lives.”

The AAJ Paralegal of the Year Award is given to an exceptional AAJ Paralegal Affiliate member who has made contributions to the paralegal profession, shown commitment to continuing legal education, and commitment to community volunteering. Advocate Capital, Inc. is proud to sponsor this award that recognizes the important, key role that paralegals play in our nation’s civil justice system and in our communities.

West will receive the award at AAJ’s 2019 Annual Convention on July 27-30th in San Diego, California. Complimentary airfare, hotel accommodations, and registration will be provided.

Advocate Capital, Inc. is the premier provider of strategic financial products and accounting services for successful trial law firms. It has served the plaintiff bar for 20 years from its headquarters in Nashville, TN and enjoys a client base that extends nationwide. For more information, visit www.advocatecapital.com or call 1.877.894.9724.