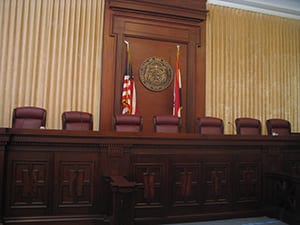 In a recent article, the Kansas City Star reports that the Missouri Supreme Court “brushed by the legislature’s limits on punitive damages this week, saying they don’t apply to a $1 million verdict a jury awarded to an Excelsior Springs woman.”  Lillian M. Lewellen “received the judgment in 2012 after she was defrauded by car dealer Chad Franklin.”  Lewellen had purchased a used Lincoln Town Car “after being told she would have to make payments of only $49 a month,” but “after several months, she learned she would have to pay $387 a month.”  After a Clay County jury ordered Franklin to pay Lewellen $1 million in punitive damages, “a judge cut the judgment in half, citing a state law that capped some punitive damage awards at $500,000.”  The Supreme Court “restored the judgment because Lewellen had filed her claim as a common law fraud, which has existed in Missouri since the first state constitution was written.”

Although the opinion is limited in striking down caps on punitive damages, it is gratifying to see some movement in that direction.

A summary of the opinion can be read here, and the full opinion is here.