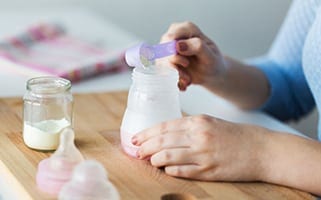 Neocate is one of the many popular brands of formula for infants and young children who are allergic to cow’s milk. Recent reports and studies have linked the formula to an increased risk of bone fracture and rickets in children. There has even been a case of a parent being accused of child abuse because of fractures which couldn’t be explained.

Our client and friend Eric T Chaffin writes about how this formula is connected to bone problems. Neocate is a product that is dairy free, soy oil free, and is considered an “amino-acid-based” formula designed to prevent an allergic reaction.

Scientist found evidence in a study of children being fed only Neocate formula had an abnormally low level of phosphate in the blood which is related to bone problems. Doctors detected this condition in these children and noticed they also had problems with fractures, rickets, and a vitamin-D deficiency that results in soft and deformed bones.

Chaffin writes in “94 percent of the cases” these children had deformed bones, fractures, vitamin-D deficiency, or rickets. Many children improved when they were taken off Neocate or given a supplemental phosphate.

Parents who are feeding their child Neocate should be on the lookout for these related problems with their child. According to Clarion Ledger, a father in Mississippi was accused of child abuse because his 10-year-old son who has cerebral palsy had unexplained fractures. Child Protective Services started an investigation when the father could not explain how his son’s wrist was fractured when he took him to the hospital.

The father hired a lawyer and later realized Neocate might be the source of the unexplained fractures. The lawyer was able to have the child service inquiry closed. After the case was closed, the son was placed in the hospital for five months to be weaned off the formula.

Parents who are giving their child Neocate are strongly encouraged to visit a doctor and have the child’s blood tested for low phosphate levels.