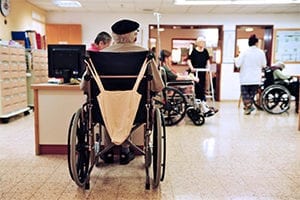 The nursing home industry is notorious for denying patients and their families their day in court, mostly through forced arbitration agreements. These agreements only allow for confidential, alternative dispute resolution where no judge or jury is present. Instead, the legal proceeding is placed in front of an arbiter or third party (often paid for by the nursing home) with little opportunity to seek or offer evidence in cases of negligent behavior, elder abuse, sexual harassment, and even wrongful death. Now, why would anyone choose a nursing home that participates in this process? It is usually unknown to them when they sign the dotted line, but things become pretty clear when they file a lawsuit.

This trend of burying arbitration clauses in admission contracts is something Public Justice’s Paul Bland calls “categorically heinous”. In an article in The Legal Examiner, he says it is “a grave injustice” that these potential nursing home residents and their families never see or understand these agreements, but yet their constitutional rights are completely governed by them. What’s more, Bland says arbitration is almost never stacked in the resident’s favor. He says groups like the American Health Care Association (AHCA) defend arbitration as a “fair and effective legal process,” but under its conditions, acts of wrongdoing by nursing homes never find their way into the public eye. Bland says if the same claims were decided by the court, more current and potential nursing home residents would be aware of the injustice, voice their concerns, and help deter these facilities from providing unsafe conditions.

The Centers for Medicare and Medicaid Services (CMS) nearly put a stop to nursing home arbitration last year. In September 2016, the agency issued a rule preventing federally-funded facilities from using forced arbitration or requiring residents to sign the agreements as a condition of admission. Before it could take effect, the rule was blocked by a U.S. District Judge in Mississippi (read more about this injunction here) and could not move forward unless CMS successfully appealed.

Unfortunately, Bland says the final day to challenge that Mississippi judge’s decision arrived earlier this summer with no appeal from CMS. Accompanying the missed appeal was the proposed H.R. 1215 bill which Bland says could roll back the prohibition on pre-dispute forced arbitration agreements further (read more about the proposed legislation here). If that happens and the legislation becomes law, Bland fears the doors of justice will be closed to even more suffering seniors and their families.