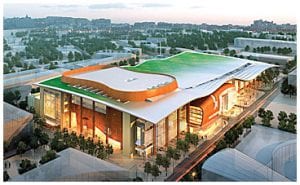 The Advocate Capital, Inc. team is extremely proud to call Nashville home.  In case you haven’t heard, the Music City is pretty hot right now!  The New York Times celebrated our home town as the new “it” city, saying that “Nashville’s latest big hit could be the city itself.”  A recent Gallup poll showed that Nashville was one of the top 5 large cities in the nation in job creation.  GQ Magazine called us “Nowville”.  The list could go on, but it’s certain that Nashville is a city on the move.

The latest exciting project that’s getting national attention is the opening of the new Music City Center – a 1.2 million square foot convention center that will put Nashville on an even playing field (and then some) with convention destinations such as New Orleans, Atlanta and Las Vegas.  The process of building this center began in 2004, when the Metro Nashville government released a study recommending construction of additional convention space.  After Karl Dean was elected Mayor in 2007, the project picked up steam.  After a great deal of coalition-building, the City Council overwhelmingly approved the construction of the center in January, 2010.  Groundbreaking was held in March, 2010 and the new building opened officially on May 21, 2013.  The center has already spurred a remarkable amount of development and new business in the downtown and SoBro (South of Broadway) neighborhoods in Nashville, and has already hit its goal of 1 million room nights booked in Nashville hotel rooms as a result of future conventions and trade shows.

If you ever find yourself in the Music City, you should be sure to see the building.  If you can’t make it here in person, you can learn more about it here.