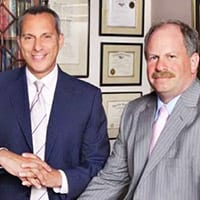 Congratulations to Ira M. Perlman, of the Law Offices of Ira M. Perlman and Robert D. Rosen, on this outstanding victory for their client, Laura Mata.

Doctors suggested Ms. Mata undergo open reduction surgery and internal fixation. Pregnant at the time of her injury, she opted for less invasive closed reduction surgery for fear that the more intrusive surgery could harm her unborn child.

The plaintiff, Ms. Mata, brought suit against the owner of the premises, 167 8th Avenue, LLC, claiming that the company did not properly maintain the sidewalk. Under applicable law in the City of New York, Mr. Perlman successfully proved that nobody other than the defendant building owner had the responsibility to repair the public sidewalk regardless of who caused the defective conditions. The defendant countered that the damage in the sidewalk was open and obvious and that the plaintiff should have taken steps to avoid it. Further, the defendant testified that it advised its tenant, a tavern, to address the problem, as it had been caused by the repeated delivery of heavy kegs.

At trial, the plaintiff invoked the “eggshell plaintiff” doctrine, noting that her pregnancy had hindered her healing process, diminished the effect of physical therapy and prevented the use of pain killers, which could have brought substantial relief. Furthermore, after her pregnancy, she required arthroscopic surgery involving debridement and resection of the damaged tissue. The plaintiff’s treating surgeon opined that the delay in surgery resulted in a severe reduction of the rotational ability and stability of the knee, which would result in the need for additional surgery.

For over 25 years, the Law Offices of Ira M. Perlman and Robert D. Rosen have practiced personal injury law in the State of New York. They associate their reputation and ongoing wide success to their personal involvement and dedication to anybody who becomes a client of theirs. The tenacity and passion of Mr. Perlman and Mr. Rosen stem from their deep commitment to pursuing the rights of those who have been wronged in order to provide full and fair justice for all harms and losses suffered.