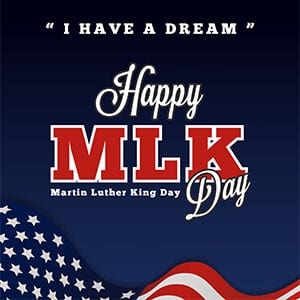 Today is Martin Luther King, Jr. Day, a day we celebrate a man who embodied courage, love, and a commitment to justice and equality for all people. It’s a day we remember Dr. King’s life and legacy, how he led a civil rights movement for freedom in this country and how he ultimately paid the highest price to see it become reality. Martin Luther King, Jr. Day is a day we set aside to honor those tremendous contributions and come together as the united multiracial nation he dreamed of so many years ago.

However, not every state, city and town always celebrated the federal holiday. According to TIME Magazine, it wasn’t until 17 years ago that South Carolina signed a bill and became the last state to recognize Martin Luther King Jr. Day as a paid holiday. The day itself was proposed nearly immediately following King’s assassination on April 4, 1968, but not until after years of petitioning and testifying to Congress did it officially become law in 1983. Then on the third Monday in January 1986, the King Holiday was observed for the first time here in the United States, and according to The King Center is now also observed on this day in more than 100 nations around the world.

Advocate Capital is thankful for Dr. Martin Luther King, Jr. and the actions he took to champion for racial justice and equality. Dr. King was a man who led by example, who advocated for social change, and who paved the way for historic reform. We hope that you join us in honoring him today, but also remember his lasting impact on this country every day of the year.