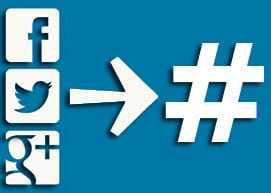 Since their launch on Twitter in 2007, hashtags have taken the world of social media by storm and connected users to a vast audience of people who they may or may not follow. As a business, it is important to use hashtags to align your posts with similar content and encourage new followers. In the latest updates to Google search, it is now easier to research hashtags before attaching them to your business.

In the article, “The Role of #Hashtags in Social Media and Search”, technical marketing veteran Rebecca Murtagh states that “recent Google updates have amplified visibility of hashtags in organic search results on Google.com as well as Google+.” Businesses can now view public posts and tweets using the specific hashtags and determine if it is a category they wish to have their brand associated with. This update to the search engine also helps increase content visibility when using hastags associated with events, breaking news or trends.

It is crucial to do your research before publishing content using hashtags. The article gives several examples of “Hashtag #Fails” or “bashtags” such as #McDStories and #ILoveWalgreens. Originally intended to produce positive feedback, these hashtags campaigns produced large amounts of criticism and negative feedback about the companies and their products. Don’t be afraid to use hashtags and create hashtag campaigns but always use caution.