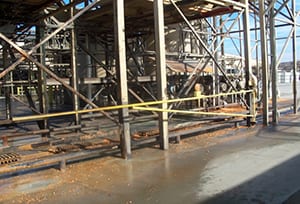 Congratulations to Roger E. Booth, the team at The Law Offices of Booth|Koskoff and their client, who recently obtained a policy limits settlement of $3 Million.

The Plaintiff was driving a forklift at his employer’s plant, when he encountered a 20 foot long metal “pole” gate that was left open, facing the wrong direction, and directly in his path. Per company policy, this gate was to remain closed and only opened in a particular manner secured with a pin. At the time of plaintiff’s injury, the gate was open, facing the wrong direction, and was unsecured. Before he could react, the end of the gate penetrated the front of his forklift and impaled the Plaintiff.  Incredibly, he survived this horrific ordeal but the accident destroyed one kidney, severely damaged the other kidney and caused substantial damage to his legs. He spent an entire year in the hospital. The Plaintiff is awaiting a kidney transplant and takes dialysis treatments three times per week.

Because the gate in this accident was a “restricted access” barrier to a particular area of the plant, one of the numerous challenges for Mr. Booth was to prove who opened the gate. If the negligent party was a plant employee, then the Plaintiff would be limited to workers’ compensation benefits.  Mr. Booth and his team undertook a lengthy and painstaking investigation to discover who was at fault for the Plaintiff’s injuries. Discovery revealed that an outside truck driver had driven through the area just 10 minutes before the Plaintiff’s accident. The truck driver’s normal route was blocked, so he opened the gate and left a trail of water in his path. Discovery also revealed that the truck driver had been working extremely excessive hours (almost 2 days) without required rest periods and breaks.

Another challenge for Mr. Booth was determining how to preserve the Plaintiff’s workers compensation medical benefits that he so desperately needed since third party liability was involved. The workers’ compensation insurance carrier had a lien of $2 Million and the Plaintiff needed lifetime medical care. After lengthy negotiations, Mr. Booth was able to convince the carrier to accept less than 20 cents on the dollar to resolve its lien, thus preserving future workers’ compensation benefits and a substantial third party recovery for his client.

Roger Booth has made it his mission to zealously represent catastrophically injured individuals. To learn more about the numerous large recoveries through settlement and verdicts, click here.

Congratulations to Mr. Booth and the entire team at The Law Offices of Booth|Koskoff on this outstanding result for your client. We at Advocate Capital, Inc. are proud to support trial attorneys as they fight for the rights of those injured due to the negligence of others.