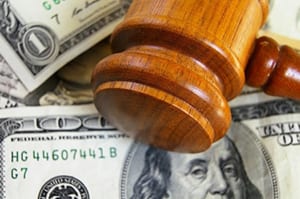 USA Today reports that two “ideals held in high esteem by the Supreme Court – free speech and judicial integrity – collide Tuesday in a case that presents justices with a difficult choice.” The dispute pits “the code of conduct for judicial candidates in Florida, which prohibits them from directly soliciting campaign cash,” against “Lanell Williams-Yulee, a losing county court candidate who ran afoul of that canon in 2009 and was reprimanded for signing a fundraising letter.” The court must seek “the sweet spot between the two – what the Florida Bar calls ‘the proper balance between two compelling interests at the heart of a free and just society.’” The court’s “conservative majority has robustly defended free speech and its financial twin, campaign fundraising, in a string of cases, from 2010’s Citizens United decision allowing unlimited independent political expenditures to last year’s McCutcheon ruling removing aggregate limits on wealthy donors. Its liberal minority dissented vehemently in those cases.”

The AP reports that voters in the Tampa, FL area “didn’t think much of Lanell Williams-Yulee’s campaign for county judge in 2010, and the group that regulates Florida’s lawyers didn’t much like her campaign tactics.” After “being drubbed in the election, she was hauled before the Florida Bar for violating its ban on personally soliciting campaign contributions by sending a ‘Dear Friend’ letter asking for money.” Five years after the Supreme Court “freed corporations and labor unions to spend freely in federal elections, the justices will hear arguments Tuesday in Williams-Yulee’s challenge to the Florida rules, which she says violate her right to speak freely. “

The Christian Science Monitor reports that if Williams-Yulee “had been running for a county commission seat, her mass-mailed solicitation would have sounded no alarm bells,” but “as a candidate for a judicial office, her request for contributions attracted the attention of lawyers with The Florida Bar,” which “charged her with violating an ethics rule that prohibits judicial candidates in Florida from personally soliciting for campaign funds and support.” Williams-Yulee’s attorneys “challenged the constitutionality of the rule,” arguing that “Florida’s canon of judicial conduct violates a judicial candidate’s free-speech right to communicate with prospective voters.”