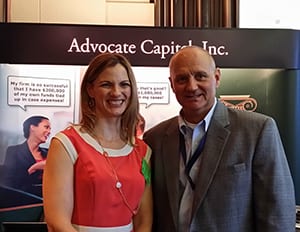 Lisa Wagner and I were proud to represent Advocate Capital at the Texas Trial Lawyer Association convention in Austin. The convention provided an excellent opportunity to meet several clients including TTLA President Michael Guajardo and incoming Texas State Bar President E.A. Trey Apffel among several others. Thanks to TTLA staff for organizing a great show which had abundant energy. One aspect that makes TTLA convention different from other conventions is an opportunity to address the attendees for a few minutes and discuss your company. Giving us a chance to help increase booth traffic during the show. 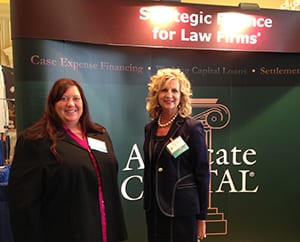 This week Donna Jones and Jeff Glueck are off to Lake Ozark for the Missouri Association of Trial Attorneys’ convention. I believe the tradeshow season is in full swing for 2014! Thank you to the marketing team at Advocate Capital for outstanding execution and planning.

Click on the links to view photos from the TTLA and FJA conventions.