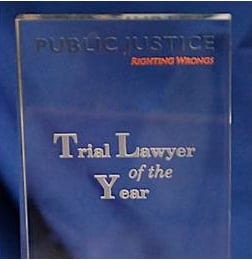 Nominations are now being accepted for the 2014 Public Justice Trial Lawyer of the Year Award.

Exceptional, socially significant cases that were won or settled between March 16, 2013 and March 16, 2014 are eligible for this year’s award.  Finalists and recipients exemplify how trial lawyers use their skills and determination to create a more just society.

The Public Justice Foundation will announce the finalists for the Trial Lawyer of the Year Award in May 2014. The winner(s) will be announced at Public Justice’s Annual Awards Dinner & Gala in Baltimore on Monday, July 28, 2014.

Please send your Trial Lawyer of the Year Award nominations via e-mail to Catherine Behan at [email protected] (with the subject line “2014 TLOY Nomination”). Please include the nominee’s name and firm, the name of the case, how you think the case impacts the public interest and why you believe this attorney or litigation team deserves the award.

Public Justice will contact the nominees, from whom they will seek specific information regarding their cases and, where applicable, their legal teams.

Don’t delay! The deadline for nominations is Wednesday, April 2, 2014!