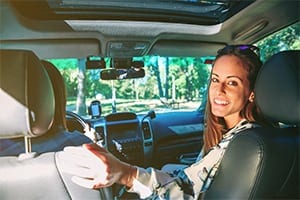 If you’ve taken a road trip recently, or are planning to take one this summer, you will most likely want to lean your seat back at some point to rest. Of course, this seems perfectly safe (and well deserved) as you ride in the passenger seat after completing your turn behind the wheel, but it can actually be deceptively unsafe. That short car nap can put you at an increased risk of serious injury or even death.

In an article in The Legal Examiner, Mark Emison says when a passenger’s seat is reclined, they are no longer being protected by their seat belt. Although many people believe simply buckling up will keep them safe, he says this measure becomes powerless whenever you’re in the reclined position. It’s because the more space between the seat belt’s upper strap and your chest, the more at risk you are in the event of an accident. Emison says if one does happen, your body can either slam against the seat belt or “submarine” and slide beneath it.

Emison says automakers like Ford, GM, Chrysler and Toyota have all known about the dangers of reclined car seats since the 1964 Stapp Car Crash Conference. However, because there are no Federal Motor Vehicle Safety Standards governing these risks, he says car manufacturers will choose to forego any type of warning labels or make the required vehicle changes to reduce the hazards of reclined seats.

In an article in Slate, Emily Bazelon says carmakers have continually argued that it is “common sense” that a reclined seat is more dangerous than an upright one. She says despite a National Transportation Safety Board study that found leaning your seat back can create “a potentially dangerous combination in a moving vehicle,” there has been no government action. In addition to that study, Bazelon says the National Highway Transportation Safety Administration concluded that “it is likely that most people who ride with the seat back reclined are not aware of the associated risk,” but still no government agency has taken action.

Emison says there are several ways for automakers to eliminate the risk of harm from reclined car seats such as incorporating “integrated seat belts” or adding visible and audible warnings like they already do when someone doesn’t put their seat belt on right away. To read more of his solutions, click here.