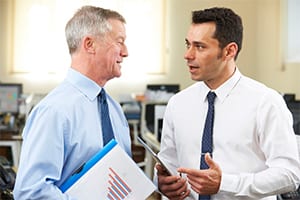 When we hear of a mentoring program, many of us automatically assume it involves an older, more experienced worker giving advice and guidance to a younger one. However, this isn’t always the case. Sometimes these programs are executed in the opposite format, where younger workers help those who are older. It is what’s known as reverse mentoring.

In an article on the Lawyerist.com, Stephen Embry discusses the benefits of reverse mentoring for the law profession. He says while it obviously allows for attorneys who may not be as well-versed in technology to learn from those with a more perceptive view of it, reverse mentoring can also extend beyond explaining new digital communication tools. Embry says it can lead to a better understanding between the generations, particularly in areas such as culture, motivation, values, skills and processes.

Embry says reverse mentoring provides older lawyers with useful feedback on what drives younger talent and how to better attract and recruit it to their firms. On the other hand, it teaches leadership skills to younger attorneys new to the world of work and how they should handle professional relationships with clients, many of whom will be older than they are. Embry says reverse mentoring may address the idea that younger lawyers don’t have much to offer. He says it allows their voices to be heard.

Despite so many benefits, Embry says the challenge for law firms is in successfully rolling out their reverse mentoring programs. He says programs must encourage mutual mentoring (and even possibly be named accordingly) to ensure they remain a setting where information and advice are shared. He also says they should follow the guidelines of any mentoring program: defined objectives, a willingness to learn, transparency, and most importantly, commitment.

Embry says reverse mentoring can add unexpected, yet invaluable, perspective for both sides. For when older and younger lawyers are open and understanding of one another, it only makes the practice more efficient and better suited to serve those in need.