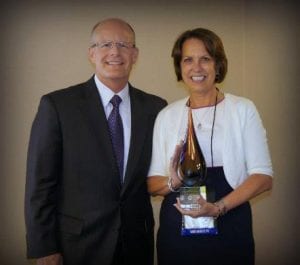 Ms. Korb is a paralegal at the Johnson Eiesland Law Offices in Rapid City, South Dakota. Dennyce was nominated by Gregory A. Eiesland who was in attendance along with Dennyce’s family to watch her receive the award.

Dennyce has been a paralegal for over 30 years.  During that time she has worked with clients who have been injured by nursing home abuse and neglect, medical malpractice, or defective products.  Ms. Korb has actively participated in the trial of nearly 100 cases. During the award ceremony, Dennyce was gracious, enthusiastic and extremely appreciative for being selected as this year’s recipient.

Advocate Capital, Inc. and The American Association for Justice recognize the great importance of paralegals to the legal profession and are delighted to help recognize the paralegals who work so hard to help trial lawyers achieve justice for their clients.  We congratulate Dennyce on her achievements!