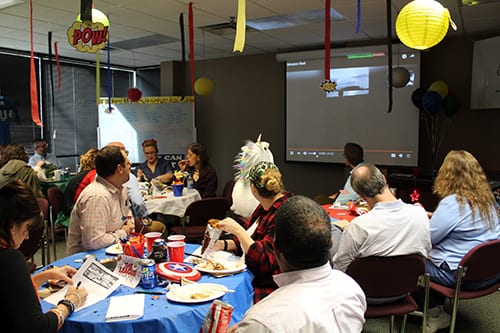 Our team at Advocate Capital, Inc. doesn’t just fight for plaintiff law firms, we fight like superheroes. Well, at least that was the case on October 31st when our Nashville office held its Halloween Employee Appreciation event. The theme, far from spooky, was based on characters from Marvel’s “Avengers” and DC’s “Justice League,” and it demonstrated just how super Advocate Capital, Inc. employees could be.

The company’s marketing team was in charge of hosting the event, and they didn’t take that task lightly. They created a promotional video, filled the entire office with superhero colors, props, and posters, and dressed as powerful heroines themselves; and they weren’t the only ones in character. President and CEO Michael J. Swanson came as “Spiderman,” and other employees dressed as fun versions of “The Mad Hatter,” “Robin,” and a “Super Corny” Unicorn.

However, it was Advocate Capital’s Sarah Hazelwood who was voted “Best Costume” with her unique take on “Rosie the Riveter”. Congratulations Sarah!

In addition to the event’s catered lunch provided by the Potbelly Sandwich Shop, employees were served a host of different games and activities. The first activity was a superhero quiz with questions only a true comic book lover would know. The second activity was a timed relay that included tossing items into a bucket, testing one’s hopscotch skills, and ciphering through clues to find a hidden object. In the end, Laszlo Kovacs was crowned superhero trivia champ (after answering two consecutive rounds of quiz questions), and the team deemed “The Warriors” (Jeff Glueck, Bea Solorzano, Mary Berst, Cindy Sharp, and Todd Jackson) were the fastest to complete the timed exercise. Great job everyone! 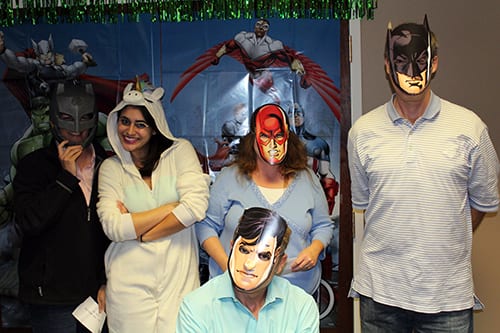 So, Advocate Capital, Inc.’s Halloween event may not have been spooky, but it was spectacular. To view more photos from the event, be sure to check out our Facebook and Google+ albums!