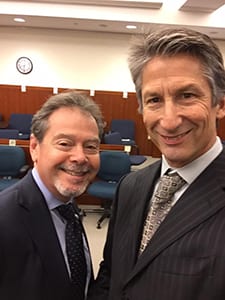 Advocate Capital would like to congratulate longtime colleagues George Choulos and Claude Wyle on a recent jury verdict in the San Francisco Superior Court.

The Plaintiff is an Iraqi war veteran, who previously suffered serious back injuries in Iraq and who had come to the Bay Area to attend Hastings Law School.  Plaintiff’s attempt to put his life back together following his injury in the service of our country was interrupted by a tragic bicycle collision.  While commuting to school, Plaintiff was knocked off his bicycle when his handle bar was clipped by the passenger side mirror of a Lexus passing too closely.  The Defendant, a retired railroad lawyer, claimed he never saw the Plaintiff and that the Plaintiff must have done something wrong to cause the collision.

The trial was memorable for three reasons:

Choulos, Choulos & Wyle handle all types of catastrophic injury cases, but the firm is particularly renowned for its success in handling motorcycle and bicycle accidents, pedestrian accidents and brain injury claims.

All of us here at Advocate Capital, Inc. applaud George Choulos and Claude Wyle for their victory on behalf of this injured veteran AND thank them for keeping the streets safer for all of us.