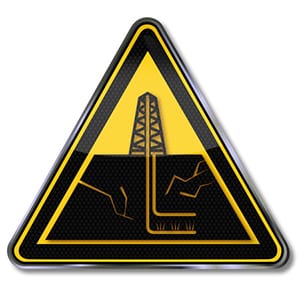 Man-made earthquakes: they are not a unique occurrence. In fact, according to a recent “60 Minutes” report by CBS News’s Bill Whitaker, the state of Oklahoma was rocked by more than 900 of those man-made quakes in 2015 alone. Yet, it is the 5.8 magnitude earthquake that rattled the state earlier this month that will go down as Oklahoma’s worst, both in general terms and by being man-made.

Whitaker says many people believe these earthquakes are the result of fracking, or pumping water and chemicals underground to release oil and gas. However, he says it is rather the waste water fracking companies have to get rid of after the fact, which is sent down a disposal well and drilled deep into the earth to a layer called the Arbuckle. The only problem is there are more than 3,000 disposal wells in Oklahoma, and the Arbuckle sits directly above a rock layer filled with earthquake faults.

With Oklahoma now seeing dozens of earthquakes occur in a single day, seismologists and other agencies are calling for action. Whitaker says many of them cite the large volumes of salt water injection into the Arbuckle as the greatest factor, and if not greatly reduced, these earthquakes will only continue. The lawyers at Public Justice also see it that way. In a recent article by Executive Director Paul Bland, he says the public interest law firm, along with other top environmental law firms, sent a letter to Oklahoma and Kansas oil and gas companies back in November 2015. In it, they warned that if their waste water activities do not change, “The risk is not only that there are more frequent earthquakes; it is also that those earthquakes have been, and will continue to be, more severe.” Sadly, as evidenced by this month’s historic quake, that prediction has held true.

Now, Public Justice has taken even more action by filing a lawsuit on behalf of the Sierra Club, an environmental organization dedicated to exploring and protecting the planet. So far, fracking companies have tried to dismiss the suit claiming they have already made voluntary reductions in waste water injections; yet, according to Whitaker’s report, the amount of waste water drilled down disposal wells in 2015 was triple the amount in 2009 bringing the total to more than 200 billion gallons of water in the last 7 years. Fracking companies also made claims based on a new law that places the state of Oklahoma in charge of regulating all their operations. Unfortunately for the state’s oil industry, this is true. Yet, although Oklahoma leaders have shut down 37 disposal wells in earthquake zones, and the Environmental Protection Agency has shut down another 17 of them, Public Justice says it’s not good enough. The law firm says unless the state fixes this man-made earthquake epidemic, the lawsuit will move forward, and they will continue to urge the courts to take action and put public safety first “before an even larger, stronger and more destructive quake hits.”