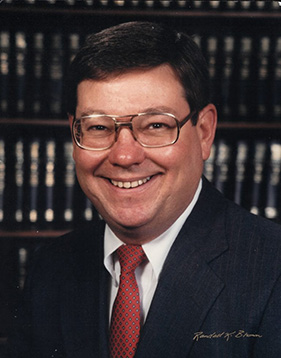 Steve Harrelson of the Harrelson Law, P.A., was destined to be a great attorney as he learned from one of the best.  Steve’s dad, Gene Harrelson, was not only a heroic influence on Steve; he was also a distinguished attorney whose legacy and impact continue to live on through the Gene Harrelson Humanitarian Scholarship Program.

Gene Harrelson was drafted to serve in the Vietnam war after completing law school. He worked as part of the Judge Advocate General’s Corps (“JAG”).  After his military career, Gene returned home and continued to serve his family and community.  As Steve stated:

“Gene gave his entire life to teach and serve others.  He would get to the office early every morning, before anyone else, to prepare for the day so that he would be ‘ready when the phone started ringing.’”

Many young attorneys that faced Gene were nervous.  They knew Gene was very skilled as an opposing counsel.  However, so many of them have told Steve that Gene would talk to them, encourage them, and help them grow as attorneys. Gene loved his work as an attorney, but he also made time with his family and hobbies a priority as well.

Gene Harrelson passed away in 2012.  Steve started the scholarship program in 2016 as a way to keep his dad’s “legacy alive and to help others in the process.”  Steve is following in Gene’s footsteps by “giving back to the life of legal servants.”  The fund awards a $500 scholarship per recipient.  Each recipient must send in a written essay outlining “what we can do as a society to help people achieve their goals and dreams.”  August of 2020 will mark the 7th recipient.

Advocate Capital, Inc. is proud to partner with Steve Harrelson and the Harrelson Law Firm, P.A., and to recognize their efforts to continue Gene Harrelson’s lifelong service.

Susan Greene joined Advocate Capital, Inc. as a Quality Assurance Analyst. Before joining Advocate, Ms. Greene worked as a paralegal for seventeen (17) years and worked for many years in the customer service field. This experience, along with her knowledge of the court system makes her uniquely qualified in her work as a client manager.