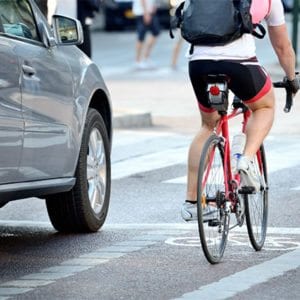 Drivers, bikers, pedestrians beware: a new report by the AAA Foundation for Traffic Safety says hit-and-run deaths are increasing nationwide, and the victims have been predominately pedestrians and cyclists.

The report, cited in The Wall Street Journal, says hit-and-run deaths jumped 61 percent in recent years. In 2016 alone, there were a total of 1,980 deadly crashes of this type, and nearly 70 percent of the people killed were either walking or riding a bike.

According to the WSJ article, the rise in fatal hit-and-runs also comes as motor-vehicle deaths in general hit a near-decade high. More than 40,000 people died last year in traffic-related incidents per the National Safety Council. It was the second year in a row the council reported statistics that high.

The AAA Foundation says fatal hit-and-run crashes and car crashes overall may be this high due to increasing smartphone use (and not just by those behind the wheel). The Governors Highway Safety Association recently reported that texting by both drivers and pedestrians alike could be to blame for the rising death rates.

Another reason cited by the AAA Foundation for the spike in hit-and-runs is the nationwide push to walk and bike more. It says more people are choosing alternative ways to get to work and stay active (the Census Bureau reports 864,000 people biked to work in 2016), but these activities are also making them more vulnerable to car and truck crashes.

However, there are measures being done to improve safety for bikers and pedestrians. The AAA report says state legislatures are cracking down on hit-and-run offenders by boosting jail time, fines, and driver’s license suspension.