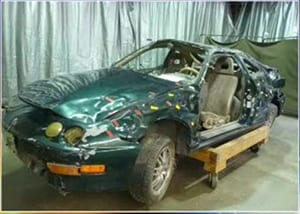 A jury has ordered Honda Motor Company to pay more than $55 million to a Pennsylvania man who became a quadriplegic after his 1999 Acura Integra (his car is pictured left) rolled over and his seatbelt failed to prevent his head from striking the roof of the vehicle. The accident occurred when a tire blowout caused Mr. Carlos Martinez to lose control of his vehicle as he was driving to work in suburban Baltimore. Mr. Eisenberg and Mr. Sherry skillfully represented the plaintiff who resides in York Pennsylvania during the nine day trial in Philadelphia. The jury unanimously determined the vehicle’s seatbelt was defectively designed. The verdict is the largest recorded in Pennsylvania history for an auto defect case. It includes $25 million for Mr. Martinez’ non-economic damages, $14.6 million for future medical expenses, $15 million for his wife’s loss of consortium, and $720,000 for loss of earnings.

Having prior knowledge of the defective design, Honda Motor Company failed to use a safer design alternative and did not provide adequate warnings to consumers about the faulty seatbelt. During discovery Mr. Eisenberg and Mr. Sherry uncovered a 1992 roll over test in which the seat belted driver would strike his or her head on the roof of the Integra, but Honda did nothing further to protect drivers from this hazard. Mr. Eisenberg is quoted as saying:

Honda’s failure to alert the public to this hazard caused Carlos Martinez to suffer debilitating and painful injuries. This incident could and should have been avoided by a safer design that already existed. Through this verdict, we are hoping to prevent such unnecessary and devastating injuries from happening to others.

Congratulations Mr. Eisenberg and Mr. Sherry for your landmark victory!