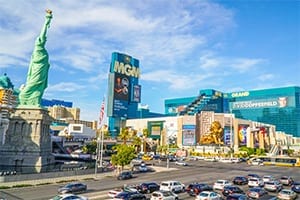 Illusionist David Copperfield was found negligent but not financially responsible for a 57-year-old man’s injuries during a vanishing act that used volunteers from a Las Vegas audience.

The Associated Press reports Gavin Cox and his wife, Minh-Hahn Cox alleged negligence by the world-famous magician, the MGM Grand hotel, two Copperfield business entities and a construction firm that was renovating the hotel.

The Washington Post says the verdict was reached on Tuesday, after several weeks of testimony. The state civil court jury deliberated for around two hours, finding negligence by Copperfield, the hotel and Copperfield’s company.

Reportedly, jurors found no liability for those named in the lawsuit and found Gavin Cox completely liable for his own injuries. Back in 2014, Cox’s attorneys had already estimated that he accumulated nearly $400,00 in medical costs.

The 2013 injury occurred when Cox and several other audience volunteers were urged to run by stagehands during an act that appeared to make audience members disappear and reappear moments later.

Reportedly Cox says he remembers stagehands shouting for him to run through an outdoor alleyway that was coated with construction dust. Cox says he fell “hard on his right side and didn’t remember getting up to finish the illusion.”

Cox was treated for a shoulder and other injuries. His wife and him later returned to the MGM theater to file an accident report.