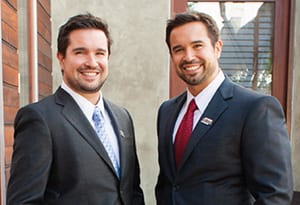 Congratulations to Attorneys Robert and Brad Simon, The Simon Law Group and their client on this outstanding jury verdict in the very conservative venue of Orange County, California.

Plaintiff is a 72 year old Columbian non-English speaker who recently became a citizen.  He went to his doctor's office to pick up a letter saying he could take a portion of his citizenship exam in Spanish.  On the way out he stepped into a planter, fell forward, and hit his head on his car injuring his neck, ultimately requiring a cervical fusion.  He was recently laid off, but testified his plan was to work until age 78, when his youngest daughter would turn 21 and he wouldn't have to support her anymore.  He is a single father, a very loving man, and the case was made all about him, his daughter and how difficult this injury was for them.

Robert Simon and co-counsel Michael Ghozland were able to complete plaintiff’s proof in less than 2 days, a total of 11 witnesses, including experts.  The plaintiff team knew from the start this was a difficult case on liability and their strategy to go on the offensive began immediately by calling the defendant as the first witness, exposing his repeated lies.  The offensive tactic included convincing the jury from the beginning that their purpose was to apportion fault.

The defense pretrial offer was $75K which was increased to $135K after jury’s first day of deliberations.  Plaintiff’s pretrial demand was $500K.  The jury ultimately returned a verdict for the plaintiff of $1,564,000 including $200K future medical expenses and $800K future non-economic damages.  Brad Simon prepared the plaintiff team’s closing Power Point presentation which clearly convinced the jury regarding liability and damages.

The Simon Law Group handles a variety of personal injury cases.  To learn more about this recent verdict and other impressive case results by the Simon team, click here.

It is gratifying for all when our civil justice works as it should to provide compensation to injured victims.  Everyone here at Advocate Capital, Inc. extends our sincerest appreciation to trial lawyers like The Simons as they pursue justice on behalf of injured citizens.