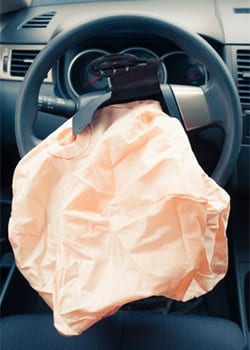 According to USA Today, Japanese auto supplier, Takata, has agreed to a $1 billion plea deal to settle its defective airbag case. The plea agreement was granted late last month by U.S. District Judge George Caram Steeh after the company admitted to deceiving automakers and concealing airbag defects over a 15-year period. The article says the airbags in question can potentially explode and send deadly shrapnel into the cabin of a car. So far, it has been blamed for at least 11 deaths.

The article says Judge Steeh initially thought the $1 billion plea deal (which includes an $850 million payment to automakers, a $125 million compensation fund, and a criminal fine of $25 million) was not enough to satisfy the charges, and he could have imposed as much as $1.5 billion in criminal penalties alone. However, the article goes on to say that Steeh decided to move forward with the deal in light of Takata’s expected bankruptcy, reasoning that steeper fines would only further punish victims and bar the company from paying.

Now, new accusations are surfacing against some of the automakers involved in the scandal. According to Consumer Reports, new documents filed in a separate lawsuit claim that at least five auto brands (BMW, Ford, Honda, Nissan, and Toyota) all knowingly installed Takata’s defective airbags into their vehicles. The National Highway Traffic Safety Administration puts the latest number of affected vehicles at 42 million worldwide, but the number of defective airbags installed in those cars is far greater, estimated between 65 to 70 million. And with only 13 million airbags replaced so far, the NHTSA says repairs won’t be completed until at least 2020.

The article also says of the automakers involved in this new legal battle, only Honda has reported a recall completion rate exceeding 50 percent. Others, like BMW, have repaired just 14-30 percent of their affected models (NHTSA).

If you are unsure whether your car falls under the Takata recall, Consumer Reports says you should check NHTSA’s website for a list of affected manufacturers, makes and model years. It also says drivers who have already had an airbag replaced may need another replacement, noting that initial replacement bags may have been safer than the original defective ones, but they’re still considered flawed and will likely be recalled as well.

You can read the full USA Today article here and the full Consumer Reports article by clicking here.