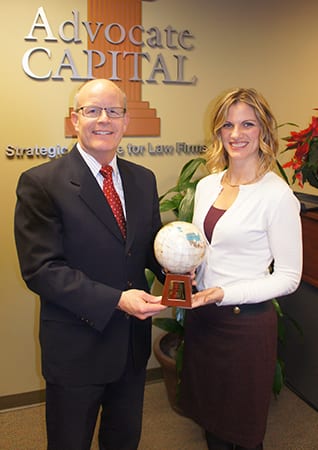 It was my privilege to recognize Tina Burns for having recently completed her tenth year as an employee of Advocate Capital!

Tina joined us on November 24, 2004 as an Administrative Assistant.  She soon proved to be a competent, capable, hardworking team player. Her consistently positive attitude and strong people skills enabled her to progress into several roles on our marketing team, eventually taking the lead as Marketing Manager in 2006.  In 2012, she was promoted to Vice President, a position she now holds.  In addition to leading our marketing team, Tina manages about 85 of our key client accounts.

At every Advocate Capital employee’s 5, 10 and 15-year anniversary, they receive an award for their office, a nice cash bonus and a gift card of their choice.  Tina chose a Tiffany & Co. gift card and received the pictured mother-of-pearl globe for her office (Click photo to view larger).

If you have a chance to speak with Tina, please join me in congratulating her on an awesome 10 years of service!